Building a Treehouse: My Pandemic Project 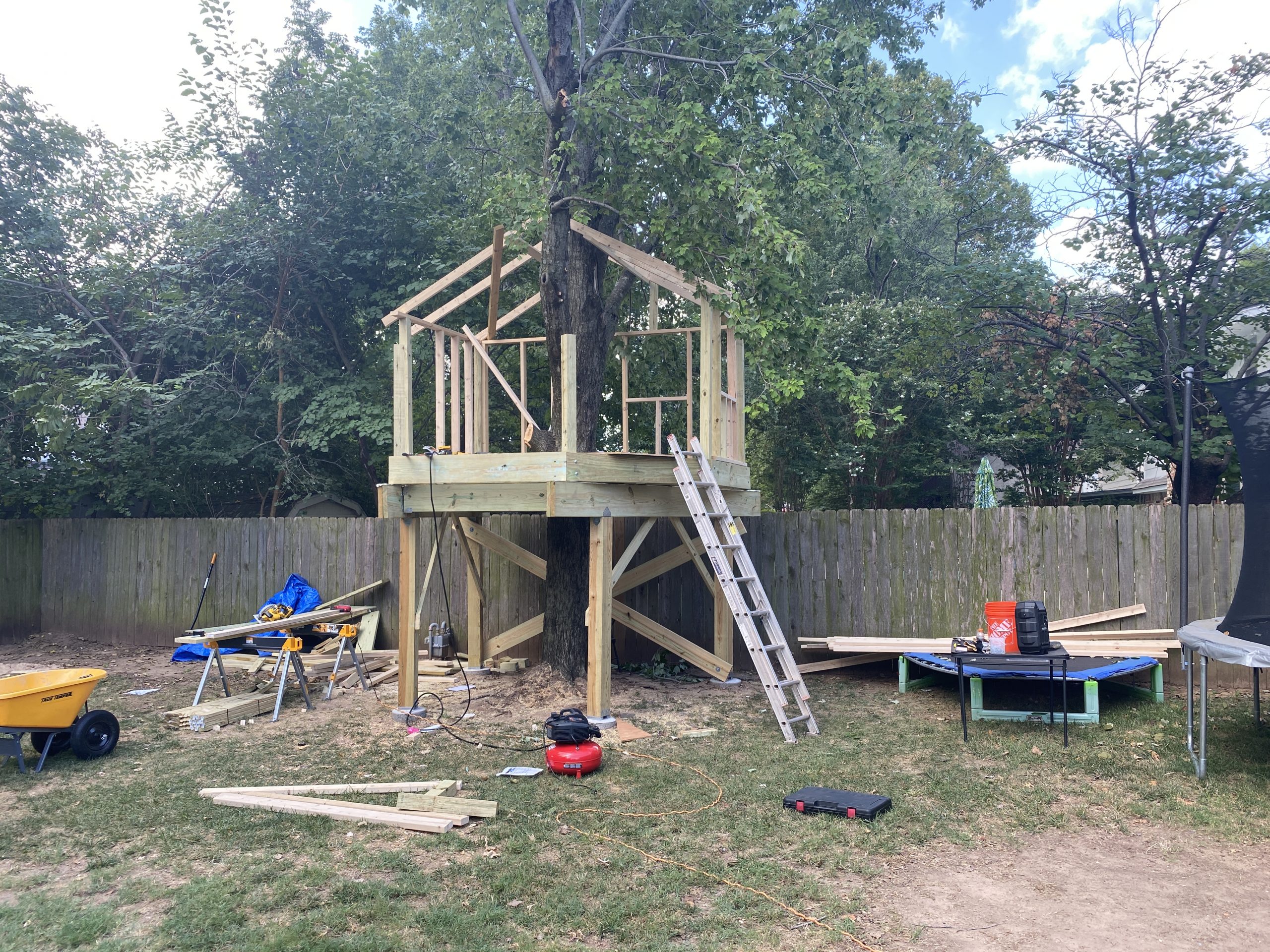 In June, TikTok tricked me into thinking I could do woodworking. I made some floating shelves and only cut myself badly once. 😉

For my next project, I was thinking shelves for the closet. The kids were thinking treehouse. I guess 3 straight months of quarantine was just enough crazy for me to agree. Here goes.

I came into this knowing NOTHING about woodworking. No joke, my first work day I spent the whole time trying to put the blade on my circular saw. All I really knew is you can learn anything on YouTube, and so YouTube taught me how to install my saw blade.

Before I broke ground, I spent several weeks drawing up designs and learning about engineering structures. I watched countless videos on building treehouses, decks, etc. Once my plans were ready, I used JustAnswer.com to run my plans by a real engineer. He had me shift the platform to reduce the cantilever and suggested 6″ posts instead of 4″. Looking back, I’m SO glad I had him review it. 4″ posts would have been way too small.

Next step, call OKIE – so they can mark underground lines, etc. Here’s a “before” picture:

Day one: breaking ground! Frost line is 18″, so we had to go 24″ down. That’s easy in dirt, but the tree roots made it extremely hard. Super proud of Josie – she dug 12″ by herself on the very first hole!

2″ of gravel so water can drain. 3 pieces of rebar in each hole.

Jack wanted to be in charge of the nuts & bolts. Literally the worst job for a 4 year old. He lost them countless times. 😉

I went with no wood underground because I didn’t want to worry about rot. Plus this makes it easier to replace in the future. What I didn’t realize (remember, I’m clueless) is pinned posts move laterally so I had to add cross bracing later on which looks pretty bulky. Oh well, learned a lesson.

Flashing on beams (and on joists later). Galvanized steel joist hangers everywhere. Hurricane ties. Wildly over-engineered. My neighbor (behind us) popped his head over the fence every once in a while and finally asked if I was planning to park a semi-truck on this thing. 😉 He’s an architect. I told him these were the recommendation of an engineer and he laughed. Apparently engineers are notorious for over doing it.

You may have noticed that this tree house doesn’t hang from the tree. Actually, it doesn’t touch it at all. I really wanted to use the huge floating tree house lag bolts, but was concerned that the tree wasn’t healthy enough. You’ll see later that this was a very fortunate decision.

Hand rail and walls starting to go up. You can see a few limbs are gone. One of the (several) crazy storms knocked down the biggest limb basically onto our swing set. A few above it were lost too. After looking inside them, they were actually pretty rotted out which I assume is a very bad thing. Glad we didn’t try to hang the whole house on the tree.

So I bought a palm nailer on a whim. Easily my favorite piece of equipment. I’m terrible with a hammer and this makes it so easy that my 6 year old loved putting nails in. It’s really loud though.

Framing the roof. Took me 3 tries. Man it was tough. I couldn’t do a beam down the middle because the tree was in the way. My treehouse isn’t particularly “square” either, so don’t look too close at the sloping.

Rafters in, walls going up. That stuff was heavy too.

Working on the door. You can see the shingles are finished here. BY FAR MY LEAST FAVORITE PART was roofing. I used a climbing harness & connected myself to the tree. I don’t know how roofers do it. I was so sore and my hands were torn to pieces.

At this point, I wasn’t very good about taking pictures. But you can see the railing is up. I used a spray gun to paint the top white. Best decision ever, but very messy. Added a climbing wall to go in one of the windows.

Lots of scraps because, well, I messed up a lot. The kiddos helped me load up the trash.

The zipline is (once again) way over-engineered. There are some online calculators that tell you thickness/etc depending on weight/torque. I needed a 6″x12″ post that was 12 feet long. Called the lumber yard and they quoted me $1500. Uh no. So we “laminated” a bunch of 2″x12″‘s together which means wood gluing them together then a ton of nails.

Josie did the big one.

Jack did the small one.

We got a little messy with the glue and might have used way too many nails, but we had fun!

Having dug the 24″ holes for the treehouse, I was terrified of this part. The post holes had to be 4 feet and 5 feet! They could have been less deep (with smaller posts) if I was willing to anchor the zipline to the ground (past the posts), but that’s ugly and would have been a tripping hazard.

Utility people said there may be a pipe around 4 feet, but as long as I dug with a shovel I couldn’t hurt it.

Besides roofing, this was the most physical day. Digging a 5 foot hole with a 4 foot shovel is… a special experience.

I didn’t get pics of the bridge or platform assembly. The platform is a 6 foot $40 spool I found on craigslist. I built steps to the platform, then a bridge from the platform to the treehouse. Also you can see there’s a ladder that goes into the trap door. The trap door is flush with the ground but you can pull it up and it stays open. I added two air piston “soft close” arms so it wouldn’t smack the kids on the head. That was quite a challenge.

My proudest moment of this whole thing is how the roof is sealed around the tree. There’s not a blog or youtube video in the world that tells you how to seal a roof around a tree. I wanted something that wouldn’t prevent the tree from growing, but I wanted to stop the rain as much as possible. I wound up spraying the waterproof, expanding foam, then painted it black, then added water proofing. Not a drop of water comes through but it’s soft so the tree should be able to grow.

Basically done – just need to seal/stain the wood once it dries (takes a few months).

My posts were square, but the zipline wire needed something round. I found this idea online to create a round part for the wire:

Added vertical shims so the wire wouldn’t slip into a crack. This worked amazingly well.

I wanted smaller kids to reach, so I added a box on the platform. Jack can barely reach!

More trash. You can see Josie has trex in her hand. I used composite decking for the platform and the treehouse. It’s expensive but lasts longer, needs no maintenance, and no splinters. Well worth it.

During this build, we had two EPIC storms. One had 80+ MPH winds (right after the roof went up) so I was happy to see no shingles come off and the hurricane ties did their job. We lost a branch on our treehouse tree though.

Later we had an insane freeze that annihilated the treehouse tree and split our other tree in half.

Sunny is a fan.

The kids wanted to build something by themselves, so Josie built a shelf and jack built a table. The drew lines of where to cut and I cut. They did everything else – measure, nail, sand, paint.

Also added a bucket on a pulley. These days Josie exchanges letters with our neighbor’s daughter weekly by swinging the bucket over the fence. She says, “I need to check my mail”. 😉

Added Christmas lights so they could have good lighting at night.

Playing SNES and eating pizza in the treehouse. Pandemic life at its finest.

This wasn’t part of the original plan, but it was pretty clear we’d never grow grass under the treehouse, so we built a concrete divider and filled it with rocks.

Pretty sure this is the only scoop Josie did. Concrete work is the worst. But not as bad as roofing. Rented a mixer at Home Depot. Very good call.

Lots of rocks. Had to delay spreading the rocks for a week because the kids liked playing on the mountain too much. 😉 We staked down a yard guard fabric just to make sure grass didn’t grow through.

Also – see the two fence colors. Yeah, that’s the same stain. I bleached our fences and power washed them, then stained them. The one on the left is before I had any idea what I was doing. I sprayed WAY too much stain AND didn’t mix it well enough. The one on the right is after I figured out how to do it. 😉

The finished product. You can see we stained the bottom half a darker “tree” color.