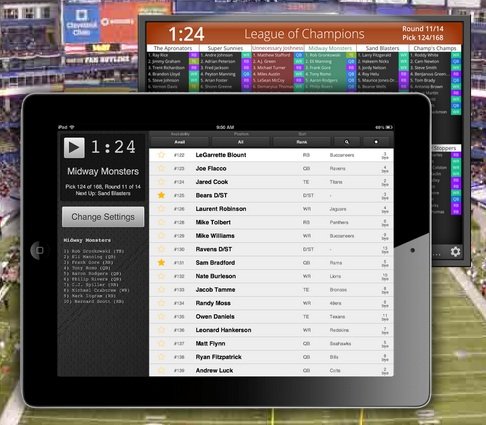 What is Draft Night?

Draft Night is fantasy football draft board software that allows people to make picks and see a live draft board on their projector or TV screen.

Check it out at http://www.draftnight.com.

Over the last few years, I’ve had a lot of great features requests for Draft Night. Some of them were fundamental changes such as “making picks from other devices”. All that to say, this year I did a complete rewrite and added nearly all of the requested features.

Previously, it was a native iPad app where the iPad was the controller. The iPad sent updates to a website where you could view (but not edit) the draft board.

This year I used NodeJS, web sockets, HTML5, and jQuery Mobile to rebuild the draft board in a way that worked in nearly any web browser. Now league managers can login from any mobile or desktop device, create a league, and allow the members to make picks from their own device. Web sockets allow the different devices to stay flawlessly in-sync. You can see a demo of the draft board software here.