Play while your phone is IN YOUR POCKET!

Pocket Potato is like playing hot potato with people all over the world!

When the device buzzes, you've got the potato. Get rid of it quick by tapping anywhere on the screen or by shaking it.

If you did it fast enough, then you get points and it will be your turn again later.

If time ran out then the device will buzz twice meaning GAME OVER! It will automatically start again, so no need to pull that phone out of your pocket to start a new game.

Play a few times while watching the screen. Once you get the hang of it, stick it in your pocket and get your game on!

Make sure you tap the screen directly with your finger – the iPhone cannot detect a tap through cloth. So put your hands in your pockets!

You can also choose 'black out mode' under settings. When the game starts the screen will turn black. This lets you hold the phone to your side while playing… no one will even know your phone is on!

If you're connected to the internet, you'll automatically play with people all over the world… you can tell because you'll see the flag of the potato bearer's country! If you're not connected, no worries… you'll still be able to play a 'fake' game alone!

The faster you get rid of the potato, the more points you get.

You can also get bonus points for choosing a 'failure sound' (under settings). Why get points for a sound? Because if your phone's in your pocket and it makes a frog sound when your game is over, people will look at you funny. And we think that's hilarious. Now that's what we call a game with consequences! (You don't get points if your sound is off)

– See flags representing the country where the potato is!

– Compare scores with people all over the world using OpenFeint

– A brief tutorial explains how to play 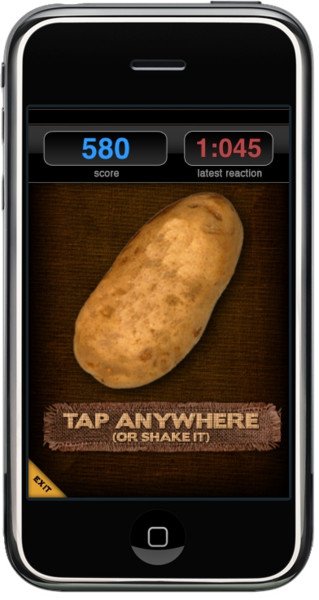