Last year my wife and I made a list of 20 questions for everyone to answer before our Superbowl party. Prop bets, actually. As we watched the game, the questions were answered and it kept things interesting for those of us who don't care much for the actual games.

Each choice was weighted… you got more points if your answer was less likely. So on the question, "Will there be a safety?" the answer "No" got 20 points but "Yes" got 500 points.

The weighting is based on actual Vegas odds for each bet. That's right, Vegas actually has odds on "Which instrument will be smashed first on stage at half time?"

Last year, we showed everyone's answers on a screen along with the current scores. It was a giant table of obfuscated numbers and letters.

This year we stepped it up. As you can see above, we had a full out "game board". Everyone logged in the week before the game to choose their team name, choose their colors, and answer 20 multiple choice questions.

During the game, the little football players started on the goal line (at the left of the screen). As questions were answered, the players literally began racing to the right. At the end, the winning player crossed into the end zone and confetti shot all over the screen.

To top it off, we added some fun trivia to the scoreboard behind the field. It would say stuff like:

We also added a ticker at the bottom that said the upcoming question… that way everybody could know what was coming. And above that, were colored squares matching each player's colors which listed their team name, total points, and potential points.

Then we put it all on a big 50" plasma next to the screen for everyone to watch. It was lots of fun! 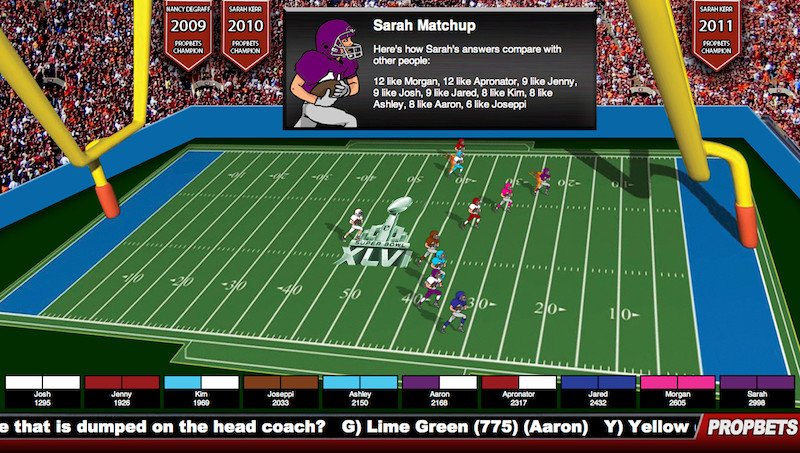